How sexism isn't limited to TV ads from big brewers, and what some local brewers are doing about it. The Society of Beer Drinking Ladies and just some of the amazing women in the beer industry. Photo by Peter Ovesny/Renee Navarro

When Christina Coady, brewer at Folly Brewpub, set out last week to write a blog post to enlist volunteers to brew a special beer with her on International Women’s Collaboration Brew Day in March (with proceeds of the beer’s eventual sales going to the Working Women Community Centre), she first thought about why a day like this was needed. “It kind of just brought to mind a lot of the experiences I’ve personally had as a consumer and as somebody who works in the industry in dealing with sexism and I realized that I had something a little more to say than just ‘hey we’re doing this event’.”

Coady isn’t the only brewer with something to say. “Most of my experiences as a female brewer have been positive and I usually feel equal to my male counterparts within the industry.” says Erin Broadfoot, brewer at Whitby’s 5 Paddles Brewing. “However, every once in awhile something happens to remind me that I am a female working in a male-dominated industry that is still struggling with sexism and gender bias.”

While for the most part the craft beer community is incredibly welcoming and inclusive, many forget that, like all communities, there is a social aspect that comes with some very serious problems for both the beer-drinking public and the people within the industry. While many minds may go to early 90s big brewer ads featuring bikini-clad women jumping up and down for everyday drinking dudebros, sexism within the small beer world takes on many subtle and not-so subtle faces.

Such problems can be from the more widely known issues of inappropriate jokes, sexist ads, and tasteless beer labels to having it assumed that a woman isn’t the one making or enjoying the beer.

Says Broadfoot: “People often assume the girl cannot be the one making the beer or working the equipment, and are often passed by. I’ve had other professional brewers come into the brewery and introduce themselves to the men, but not myself as they assumed I must just be the counter help.”

Indeed, most women within the industry have at least one “story” involving inappropriate jokes, profiling, or sexual propositions, and quite often there’s a reluctance to talk about it openly. Since the topic of sexism is a heated one at best, fear of a bad reputation or being branded as “difficult” often prevents women from speaking out.

As Coady says, “You’re saying to people that this industry that you love has a problem and telling people that is always scary,” Coady says. 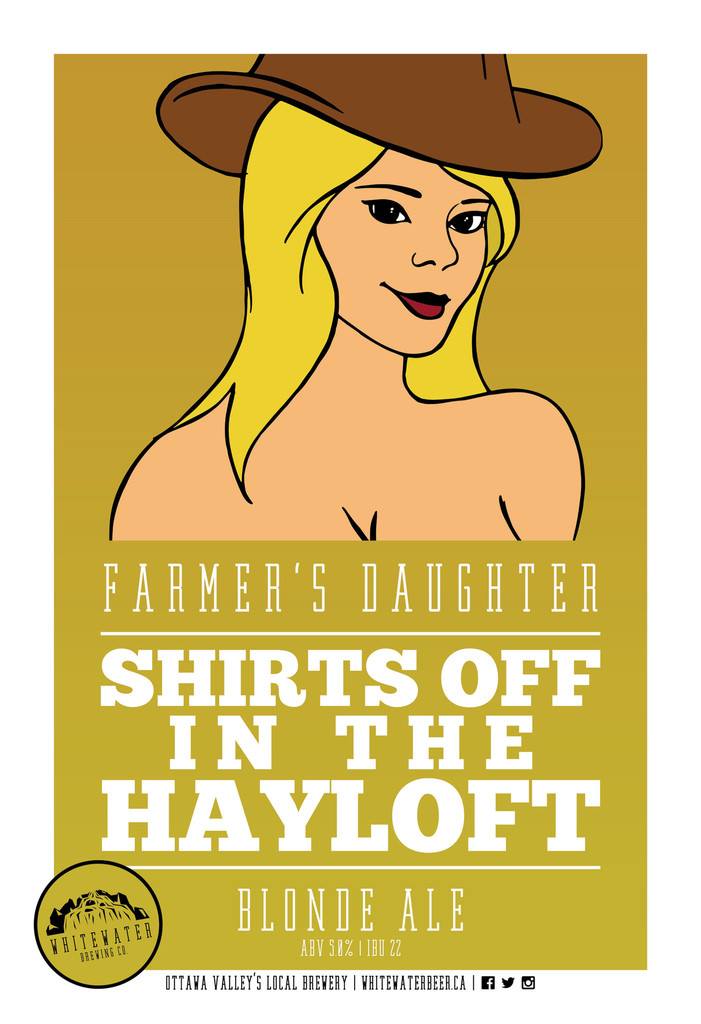 Another all too common problem with addressing the issue, especially when it comes to inappropriate beer labels or ads, is figuring out if the folks behind them are intentionally alienating women as an audience because they don’t see a market in them, or if it’s just a really crappy sense of humour. If anyone complains about a particular label or ad campaign, they just “don’t get the joke”.

“I assume that it’s them trying to be funny and I hope it’s nothing more, but the problem is that it never comes off that way to the recipient.”

While there has sadly been little change in many of the breweries who use sex to sell their beer, public response to the issue has been overwhelmingly positive and women both in and out of the industry can take comfort knowing that they aren’t alone and that there are many organizations out there that actively celebrate women in beer. For many within the industry, the Pink Boots Society out of Portland, Oregon is often used as an excellent resource for continued education and has a very solid scholarship program to help women advance in a career doing what they love.

For the beer-drinking women out there, the most notable organization in Toronto is without a doubt the Society of Beer Drinking Ladies. Celebrating their second year, SOBDL gathers on the last Friday of every month at a location revealed two days before. With the exception of men being welcomed after midnight, each “bevy” is strictly women only and consistently offers top-quality beers, even pouring a few that have been brewed specially for the night.

While it’s surprising and frustrating that such things still go on in the 21st century, it can’t be overstated how much women both in and out of the industry love the community despite it. For the most part our scene is a friendly and inclusive one and criticisms of some of the stains on it are only out of love and wanting to see us all enjoy drinking or working in beer without having our reason for being there questioned because of our gender. After all, we all share our mutual love of beer.

Tickets for the Society of Beer Drinking Ladies’ Birthday Bevy are still available for sale. Get ‘’em while you can!

If you’re interested in participating with Folly brewery’s Christina Coady for International Women’s Collaboration Brew Day, sign-ups have officially closed due to high demand in brewing at a small space. However, Coady asks that you e-mail her and she will provide updates for a possible second brewing day.