Alice Dances with a Giant Cat in the National Ballet's Wonderland
Torontoist has been acquired by Daily Hive Toronto - Your City. Now. Click here to learn more.

The National Ballet's Cheshire Cat is 25 feet long, takes eight people to manipulate, and is as mischievous as ever. Sonia Rodriguez in Alice’s Adventures in Wonderland at the National Ballet of Canada. Photo by Aleksandar Antonijevic.

It’s difficult to know who has a harder time in Wonderland: Alice, or the 146 people staging the ballet.

Both parties totter on the verge of utter discombobulation. For the young heroine of Lewis Carroll’s surrealist epic, there’s the relentless strangeness of everything that’s happening—all the bizarre characters and confusing dilemmas. For the 71 performers and 75 crew members putting on Alice’s Adventure in Wonderland (March 14–29), the risk of being swept away by the tumult is equally real.

“It can get so busy that you don’t know what’s happening,” says Sonia Rodriguez, one of the principal dancers performing Alice, in conversation with Torontoist this week. (Four dancers share the role, divvying up the 15 performances between them.) Alice’s Adventures in Wonderland is a uniquely complicated ballet, with intricate set pieces, elaborate props, and integrated video projections that add their own layer of complexity, not to mention the crowds of performers. “There are so many people on stage all the time, it’s crucial that everybody’s clear on what they’re doing,” says Rodriguez.

The dancers rely on the music to get them through, closely following every count and measure with their bodies. But to save the crew from falling into chaos, there are people like Ernie Abugov, a stage manager who’s been with the company for 42 years, who make sure that the ballet is as precise off the stage as it is on. Abugov and fellow stage manager Jeff Morris sit in the wings with their scribbled-over prompt books, making sure that every crew member—from the spotlight operator to the stagehands in the “fly gallery” pulling on ropes to make set pieces appear and disappear—hits their cue.

But what about Alice? Who guides her through weird and wild Wonderland? For her, there’s a giant, grinning Cheshire Cat.

Scroll over the image to view the interactive photo annotation. 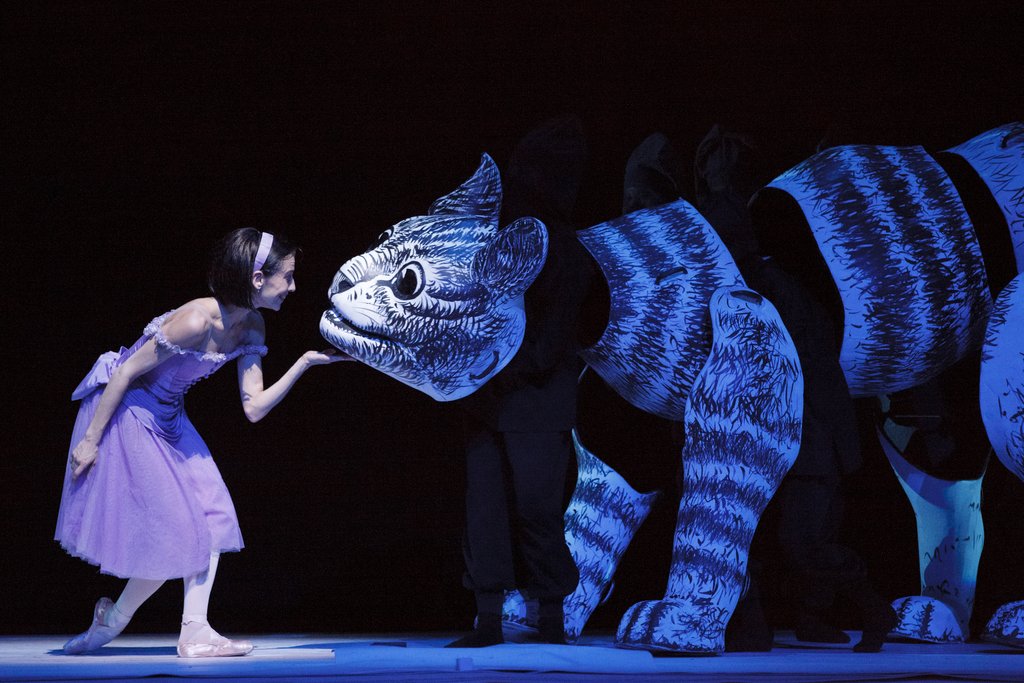 Narrative ballet has seen a resurgence in recent years, but as far as the story goes, Alice’s Adventures in Wonderland is far from your typical yarn. Choreographer Christopher Wheeldon went so far as to add a love interest—the Knave of Hearts—so it would feel more like a story. Even with a thread of romance to tie it together, however, it’s not a story that always makes sense. “It’s not supposed to,” says Rodriguez. “There’s a lot of absurdity and that’s part of it.”

To help Alice (and audiences) negotiate the nuttiness, there’s a 25-foot-long cat painted entirely in black and white—”like a Cheshire Cat should be,” says Abugov—and lit with dark blue. The pieces of the cat are hollow and made of a light but sturdy foam with fabric glued on top, and it is equipped on the inside with a handlebar. As light as it is, Abugov admits, “Some of the pieces are a little ungainly and definitely require some practice.”

Calley Skalnik, a 19-year-old ballet apprentice who’ll start dancing full-time in the corps this November, has been learning to make those ungainly pieces of foam move with feline grace. In Alice’s Adventures in Wonderland, she dances the left back leg.

Skalnik and the seven other dancers who comprise the cat have spent the last month learning to coordinate their movements so the cat moves as a whole. “You have to know the cat’s choreography, not your choreography,” Skalnik says.

That’s not an easy task when you’re wearing a full-body black costume and black mask (“like real ninjas,” observes Abugov). “There’s just a small eye section that’s sheer mesh, and that’s black as well, so you’re squinting while you dance. Plus the lights are low,” says Skalnik.

As challenging as the outfits are, they do the trick. “Sometimes when the cat is coming out we get applause,” Skalnik says. “You often can’t even see the black outfits. You just notice the cat.”

The Cheshire Cat makes a strong impression. Abugov will attest to it: “When you get people shrieking with delight, as they did in New York show after show—that’s an audience that… Well, they know their onions, and they were bringing the house down every time the cat came in.”

Audience members looking for insight into the inner lives of their pets will be disappointed, however; this particular feline is not like other cats. While no less self-satisfied, the Cheshire Cat is more mysterious and enigmatic than your average sleepy house cat.

“There’s a lot of floating,” Skalnik says. “[The Cheshire Cat] is never actually walking—he’s just kind of levitating in space. Sometimes you wonder if he’s just a figment of her imagination.” Sonia Rodriguez with artists of the ballet performing the Cheshire Cat in Alice’s Adventures in Wonderland. Photo by Bruce Zinger.

Real or not, the cat makes genuine trouble for Alice. “She’s always asking for some support, and she keeps getting misled by him,” says Rodriguez. But even if he’s bad at giving directions, at least the oversized feline acts as a catalyst: “He keeps pushing her into yet another adventure,” she adds. From that perspective, Alice wouldn’t get anywhere if she didn’t have the Cheshire Cat to point her in the wrong direction.

“He creates distractions to get her out of uncomfortable or difficult situations,” says Rodriguez, though she wonders whether the assistance is really all that benevolent. “I’m not always sure he’s doing it on purpose.”

But the Cheshire Cat doesn’t have to be exactly helpful to make things better for Alice. Even if the world she falls into when she tumbles down the rabbit hole is a dangerous and confusing place, for Skalnik, at least, one thing is clear: “If Alice was ever safe or comforted by anything in Wonderland, it would be the cat.”