There’s so much going on across the Ist-a-Verse that it’s almost impossible to keep track these days. Fortunately, we do it so you don’t have to!
Londonist took a walk through Oliver Twist’s London, thanks to a gorgeous map layer for Google Earth. They also caught up with modern-day fictional London, with the Fantastic Four and 28 Weeks Later.
It was a week of insanity over at DCist. They started the week off with a series of tragic fires that destroyed two historic District buildings, Eastern Market and the Georgetown Public Library. Then they spent the week following the madness of the D.C. Madam story in all its glorious detail. Wrapping up the crazy business was a heated debate about the effects of D.C.’s smoking ban and some toll booths proposed by Marion Barry that left them musing about giving everyone a bicycle to ride.
If you have not yet seen the LAPD taking a baton to the FOX news crew, well, LAist has it. Despite the leading and bleeding national headlines and being the near anniversary of the LA Riots, the protest was peaceful before those 240 rubber bullets were fired. Speaking of protests, a few days before May Day, a bunch of men walked a mile in high heels to stop rape. That sort of workout deserves some Lemon & Basil flavored ice cream. Hrmmm, maybe we’ll take Bacon & Maple. In music news, LAist broke up with Coachella, but was ready for Stagecoach. They profiled Red Hot Chili Peppers’ legendary bassist Flea’s Silverlake Music Conservatory and wished Paris Hilton to jail for her DUI. In neighborhood news, Koreatown (or K-Town as they refer) is going through a renaissance.
This week, Chicagoist asked everyone what kind of beer they’re drinking, mourned the closing of an infamous Lincolnwood “landmark,” the Purple Hotel, and debated whether or not the announced Taste of Chicago lineup is any good (John Mayer, Cheap Trick, The Black Crowes, Kenny Rogers, Los Lonely Boys). You be the judge, but remember, it is free to attend. They also rehashed the age-old public smoking ban argument.
Torontoist had one busy week. They interviewed an artist who is painting 999 portraits of Borat, admired a Henri Cartier-Bresson lookalike, “discovered” some street furniture (emphasis on the “fur”), and gleefully awaited Stephen King’s arrival in Toronto. They had their eyes on the roads, as they wondered why their city’s trucks and trailers don’t have wheel guards and what their former Prime Minister is doing getting into car accidents in the downtown core.
SFist was burning, burning, burning this week. First, a fuel truck caught on fire and an overpass melted. Then there were the en fuego Warriors who burned the Mavericks and turned the Bay Area into basketball heaven. All this plus a Special Guest Appearance by Conan O’Brien. 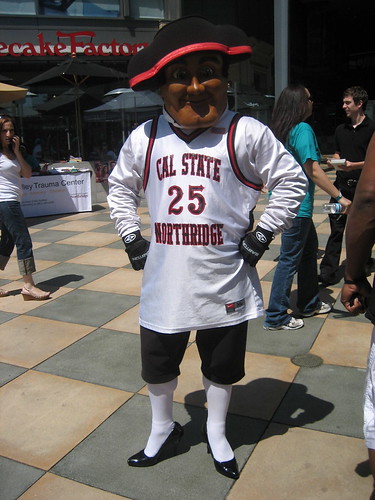 Sampaist was pleased to celebrate their 2000th picture tagged “sampaist” on Flickr. They also debated the best use for a hideous statue: scarecrow or carnival drool?
Confusion was a running theme for Gothamist this week. They were confused by why an incident about payment with pennies escalated into a media circus, why people spend thousands on bachelor/bachelorette parties, why Chase Bank leaves unshredded records on the street, and why the Department of Health would think a cat, who catches vermin, is a health threat to a store. Luckily, the universe slightly balanced itself by the DA not charging a cancer-surviving grandmother with pot possession and they can all scream for Five Boroughs Ice Cream!
Bostonist will never stop the Yankees Suck cheer – especially when Pats QB Tom Brady puts on their cap. Brady isn’t the only one rooting for the wrong team: a Boston cop was arrested on drug charges. They also watched the motorcade pull up for a Harvard Law School reunion – Alberto Gonzales stepped out, only to escape the protest through the back door. All the while, the annual rat hunt came to town, which extended the search beyond Bush’s cabinet.
Phillyist is perfectly happy right where they are, thanks. And they’ll remain so, so long as you don’t start sharing too much personal information with them. They also got all into etomology, interviewed a local newscaster, enjoyed the sunset, really loved Joss Stone, and broke a couple of religious laws—again. ?uestlove of Philly-based band The Roots got in trouble for Flying While Black, and one Phillyist refused to be half of “that” couple.
Want to know what’s going on in the rest of the Ist-a-Verse? Check out this week’s favorites on Austinist, Houstonist, Seattlest, and Shanghaiist.
Compiled and edited by Jillian Ashley Blair Ivey.
Top and bottom image by Zach Behrens, via LAist.