Spring is when we get busy here in the Ist-A-Verse. Very busy. But, after staying bundled-up indoors all winter, it’s nice for us to be out, about, and collecting things to write about for you. Here’s a glimpse at what’s been keeping your favorite citybloggers busily away from home and out of bed. 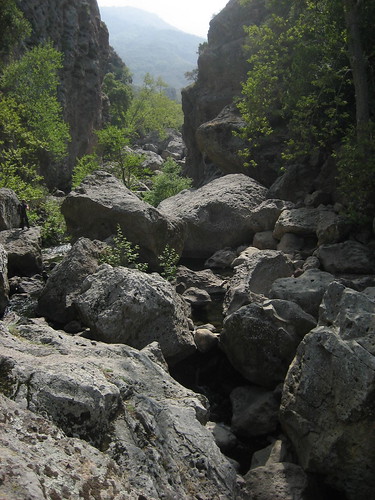 For LAist, strong winds attacked LA on the same day the Feds raided the Crips. Not to fear, though: the Japanese version of 7-11, called Famima!!, is spreading around town. That and celebrating National Grilled Cheese month with a different style everyday will make things better, not to mention the glory hole action over at UCLA. Ack!! With that image stuck in your head, maybe a beautiful rock-climbing hike 25-miles from downtown will clear your mind.
Spring may be happening somewhere, but it sure isn’t at Bostonist HQ. Ugly weather may descend on the Boston Marathon runners, and the Red Sox got rained out. It’s also raining a little bit on the inside: Dice-K was supposed to shine in his home debut, but another pitcher cast some clouds his way. And then a local actor discovered that Cadbury is pulling a fast one on us with its luscious creme-filled eggs. Staying inside with a sunlamp seems like a good idea.
Torontoist is also still patiently waiting for spring to arrive, but in the meantime, they declared a winner of their poetry contest (April isn’t the cruelest month, as it turns out), overheard children solving mysteries, pointed out a particularly awkward example of architecture and praised a half-decent name for a really crappy downtown development. All of this, and they still had time to make great puns about their beloved hockey team.
Chicagoist bode farewell to Vonnegut, leaked the Lolla line-up and argued about whether or not they want the Olympics. They also wondered, if they got the Olympics, whether it would be a big enough deal to add another star to Chicago’s city flag.
SFist had a busy week this week, but too bad their public transportation system had a meltdown. Also, according to the head of the Police Union, Gen X-ers are too busy to becomes cops, while the city decides whether everyone is too busy to close a street in the park on Saturdays.
Londonist wasn’t sure if it was safe to venture outside. Not with so many loaded breasts on the streets. And if you don’t get hit by a mammary, you still have to get past the zombies. And don’t mention all the unexploded bombs from WWII. Although they would risk it to visit a real world Flickr Gallery or for a spot of civil disobedience.
Houstonist welcomed spring with news of a nurse who was really afraid of being fired, an interview with Rhett Miller and a shocking expose about people Googling their dates (don’t worry, it’s a computer term) in an effort to avoid bad love decisions. Just one thing about spring confused them, though: When one gets hold of a chocolate Jesus, which end does one eat first?

DCist felt like the world was going a little crazy with the change of season. First they discovered that local amateur photographers were being harassed by the Metro Transit Police. Then they found a D.C. judge who thinks a pair of his pants are worth $67 million. Trying to insert a little sanity into their spring, they dove into a debate over using your cell phone in cafes and gave you a list of reasons to come out to march for District Voting Rights on Monday.
Austinist mourned the passing of a literary titan, and finally welcomed the arrival of spring. They were also relieved that locally-filmed Friday Night Lights was renewed for more episodes. Meanwhile, state troopers discovered a serious stash of weed while the politicos in the Capitol continued with their silly antics.
The Big Apple spring fever means a garden variety of happenings in Gothamist‘s neck of the woods. There’s a couple who hired a cabbie to drive them from Queens to Arizona and finally, officially, allowing dogs to run off-leash in the parks. Shoe companies decide to have graffiti artists tag a fake subway car, while the MTA breaks ground—for the fourth time in thirty-three years—on the Second Avenue Subway. The fever also means even the naked photographs of a law student’s Playboy TV romp pale compared to an aging shock jock’s remarks.
Phillyist was also stunned and sad over news of Vonnegut’s death, but didn’t let it stop their momentum, whether they were keeping busy covering the future of the rock musical, or a local music fest, or the very best (and absolute worst) of the Philadelphia Film Festival. They also spent some time loving their skyline, not giving all their lovin’, and debating the merits of the last winner of a certain televised musical competition—we’re sure you’ve all heard of him.
Want to know what’s going on in the rest of the Ist-A-Verse? Check out this week’s readers’ favorites on Sampaist, Seattlest, and Shanghaiist.
Compiled and edited by Jillian Ashley Blair Ivey. Top photo of Malibu Creek’s Rock Pool by LAist Zach Behrens. “Blue Monday” by Flickr user Vandelay Industries via Phillyist.