¡Forward, Russia! - Short, But Oh So Sweet
Torontoist has been acquired by Daily Hive Toronto - Your City. Now. Click here to learn more. 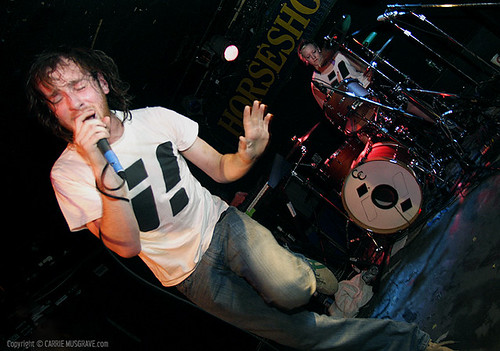 Leeds, UK’s ¡Forward, Russia! got The Horseshoe jumping on Friday night, with their “post-punk” numbered songs (all of their song titles are numbers), and a lead singer who would not stay still for a single second. Supporting their debut album ‘Give Me A Wall’, Tom Woodhead (singer) and company brought a bundle of energy to a venue that usually doesn’t see much dancing, and kept the momentum going for the entirety of their short set. It’s pointless to even bother trying to figure out which song was which (numbers are hard), but the frenetic pace was fluid from one track to the next, and it was impossible not to have your eyes glued to sweat-soaked Woodhead — who you’re sure is going to spontaneously combust right in front of you.
Unfortunately, the fun had to be cut short due to Woodhead’s ailing vocals, which could possibly have to do with the fact that he was constantly wrapping the mic cord around and around his neck like a noose; sometimes letting the mic dangle freely. At times, it was hard not to wonder if he would accidently step on the cord and suffocate himself. It was a huge disappointment to see the set cut short, but hopefully we’ll be rewarded with another full show soon.
If you’ve never heard ¡Forward, Russia! before, it’s kind of hard to describe how they sound. If you’re into Bloc Party and other bands of the like, you’ll probably dig these guys. Check out their MySpace page (linked above) for a few of their tracks (maybe skip over the first one, though).
Photo: Carrie Musgrave. Full set here.