The D Fall Just Short of The Greatest
Torontoist has been acquired by Daily Hive Toronto - Your City. Now. Click here to learn more. 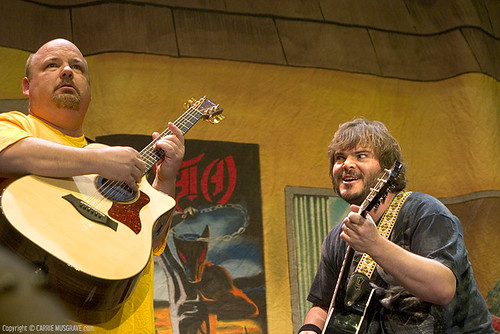 What do Colonel Sanders, Charlie Chaplin and the Anti-Christ have in common? They’re all backing members of Tenacious D, the self-professed “greatest band in the world,” who brought us all down into the pits of hell on Monday night at the Ricoh Coliseum.
Love him or hate him, Jack Black (JB) is comedy’s “it” boy these days, and along with his sidekick Kyle Gass (Kage), “The D” have developed quite a following since the early days of their self-titled HBO show. Now it seems they’re aiming for the title of “greatest actors in the world,” with the recent release of their new movie, Tenacious D in The Pick of Destiny; also the title of their latest album. However, they may have to wait a little longer, since the movie is apparently tanking at the box office. Guess it’s a good thing they’ve taken part of the film to the stage… 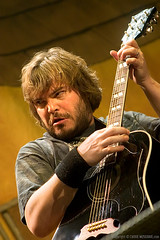 The D’s live show plays out more like a musical than straight out rock concert, including set changes, costumes, props, and of course, Jack Black’s over-the-top theatrics. To briefly summarize, they begin in Kage’s living room with some mellowed out acoustic songs, where JB presents Kage with a gift “guitar”, which then gets plugged in and electrocutes them both. Everything goes dark, and The D return only to find themselves face-to-face with the Anti-Christ down in the depths of hell. More drama and songs ensue, then the very well-dressed Satan himself shows up and The D challenge him to a rock off. If they win, they’ll get their souls back and return to earth. If they lose, well… Bet you can’t guess who wins? Perhaps you’ll have to watch the movie to find out. What? We can’t give everything away.
Overall, the show ran a bit on the long side (almost 2 hours), and at times Jack Black can be a little too much to bear. Of course, the very next minute he’s hysterically funny. Most of the lyrics are completely non-sensical, but if your two favourite words are “fuck” and “dude,” you’d be in heaven. Best song of the evening had a little extra special meaning to us Torontonians. During “Fuck Her Gently”, Jack Black advises the men to pay close attention to the lyrics, but the lines “Whats your favorite dish? Im not gonna cook it, But I’ll order it from Zanzibar” brought about more than a few giggles and visuals from the ladies in the crowd, too. For everyone’s sake, let’s just hope Zanzibar doesn’t serve food.
Hopefully next time they’re in town, they’ll be back to playing a more intimate venue (they played the Kool Haus last time), and charge less than $50. Ouch! As a band with such big personalities, they don’t really need to dress up their act with elaborate sets…we’d much prefer to see them stripped down and rocking out on a smaller stage. Maybe even at Zanzibar.
Photos: Carrie Musgrave. More here.