Panic! At The Ricoh
Torontoist has been acquired by Daily Hive Toronto - Your City. Now. Click here to learn more. 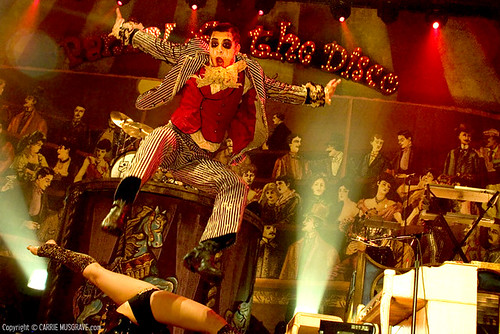 Musicians must really love our city; so many of them have made multiple trips to Toronto this year that there could be no other explanation. Or maybe they just like our money. Either way, Panic! At The Disco (P!ATD) brought their elaborate set and crew to the Ricoh Coliseum last night for the second time this year, not even six months after their first visit at the Molson Amphitheatre.
As a person out of high school, it’s all too convenient to snarkily roll your eyes and label P!ATD as a whiny emo-type band, who won’t last past next year. Fair enough. But looking at the band from an age appropriate context, it’s easy to see the mass appeal.
The first noticeable thing when walking into the arena was just how young the fans are. It’s a hard reality to accept when you relate to the many accompanying parents lined up against the railings, and realize that you could’ve legitimately given birth to about 75% of the fans there. The place was crawling with highly excitable teenagers, screaming at even the slightest mention of the band. But rather than be annoyed, it felt surprisingly refreshing, and even a tiny bit nostalgic…we’ve all been there at some point or another (oh, don’t you deny it). 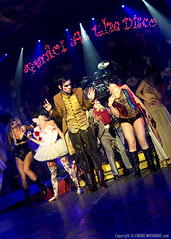 Onto the show itself, the curtain raised and Panic! appeared onto the eye-popping carnival stage in full costume and make-up resembling that of a freak show, all of which seemed way over budget for a band that’s only being touring for a year or so–until you remember their Myspace stats (over 17 million visitors and almost 1.5 million “friends”), and realize they’re probably laughing all the way to the bank. The whole set-up is completely over the top and, admittedly, is even eye candy for an overaged photographer (ahem). If that wasn’t enough, it’s hard not to keep your eyes glued to singer Brendon Urie, with his infectious charisma and energy, bounding across the stage.
With only one album to draw material from, the show was musically anemic, lasting a mere hour. It seemed like some of the song titles were longer than this show was (seriously, they have the longest song titles ever). Only five songs in the band took a break and provided some cliche carnival video filler (with little people!) to kill some time, then came out and performed a drum line number. Shortly after, during There’s A Good Reason These Tables Are Numbered Honey, You Just Haven’t Thought Of It Yet (told you the titles were long), there was some mock “girly head” action that caused a few parental jaws to drop and their eyes to bulge a bit. Next, the band covered The Beatles’ Eleanor Rigby, possibly to throw a sympathetic bone to the parents in the crowd…or possibly even to apologize for the lewdness earlier. 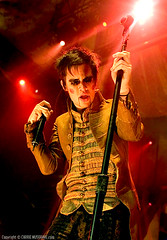 Finally, close to the end they played what the crowd seemed to be waiting for–I Write Sins Not Tragedies, the video of which has been played over 7 million times on YouTube. If you watch the video it will sum up the theatrics of the live show perfectly.
It’s easy to rip on a band like Panic! and dismiss them, but viewing the show from the perspective of an excitable 16 year old makes it understandable why this band is so wildly popular–they provide everything an overstimulated, emotional and hormonal teenager yearns for…drama. And when you see an 8 year-old boy rockin’ out the same way you see a 28 year old rock out at a Radiohead concert, you know it can’t be all that bad.
Photos: Carrie Musgrave. Full photo set can be seen here.