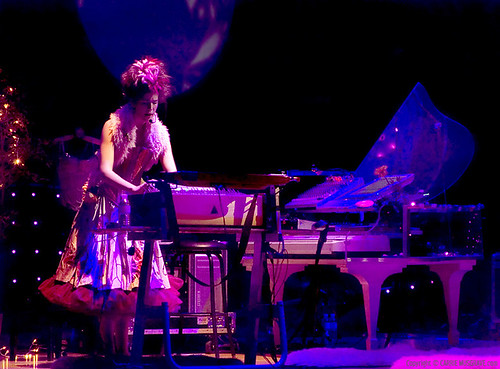 Imogen Heap
Nov. 8, 2006
Massey Hall
Back for her third show this year in Toronto (first two were at the El Mocambo and Guvernment), Imogen Heap stopped by Massey Hall on Wednesday night to entertain an almost sold-out crowd, on the second stop of her winter tour.
Padding barefoot onto the stage, Heap is adorned in one of her stunning signature dresses, with full red crinoline lining under her skirt and a corset on top (which she admitted was a little too tight to sing in). Not to be outdone, her hair is a huge backcombed tower of creation, with feathers lined down the middle. You can’t help but stare at this creature standing in front of you, and are immediately taken in before she even utters a note.
Like a child introducing her dolls to an imaginary friend, Heap begins the evening by showing off her toys to the audience. She flutters back and forth between each of her instruments, most impressive of which is the beautiful Perspex piano (pictured above), muttering in a tone that is quiet and quick, almost as though she’s playing in a bedroom all by herself. Much of the time it’s difficult to understand what she is saying, but it seemed to endear her to the crowd even more, inciting small giggles throughout the hall. With that out of the way, Heap begins the set with “I Am In Love With You” and runs through her first few songs with some technical glitches. More muttering and back-and-forthing on stage, and finally things are resolved. At this point, Heap finally hits her stride and her multi-layered vocals begin to reverberate perfectly throughout the venue.
Heap plays everything from her sophmore album Speak for Yourself, and brings her band onstage for almost every other song, including the evening’s opener Kid Beyond, an impressive beat boxer, who can produce sounds that make you wonder how they could ever come from a human. Overall highlights include “Come Here Boy” (the only song from I, Megaphone), a stripped down version of Frou Frou’s “Let Go” (on the Garden State soundtrack), and the hauntingly beautiful encore opener, “Hide and Seek”, where she stands still under a single spotlight at center stage with her keytar and you can hear a pin drop between notes.
Heap closes the evening with “The Moment I Said It”, after claiming that if she sang past 11pm she’d be fined $600. She then thanks the audience and says some other inaudible things, and gracefully twirls her way off the stage into the rest of the night.
Although she could use a little more stage presence (ie. speaking louder and clearer), Imogen Heap is someone not to be missed in concert, particularly at a venue like Massey Hall, which compliments her soaring vocals perfectly. She’s on tour in North America through the end of December, so be sure to catch her while you can.
Photo: Carrie Musgrave