In Rome, at least 1 person has died, and 10 more have been seriously injured in a subway collision involving two trains. It has been over 10 years since the Russel Hill incident here in Toronto. 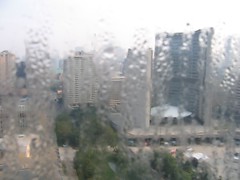 The Toronto Star’s editor-in-chief Giles Gherson and publisher Michael Goldbloom resigned on Monday. Goldbloom wrote about the declining newspaper industry in his resignation letter.
Canada’s prison system is systemically discriminatory against aboriginals, according to the ombudsman for inmates. Also, the number of native inmates has increased 21 percent between 1996 and 2004.
The Leafs have sent goalie current third-string goalie Mikael Tellqvist to the Marlies on a conditioning assignment.
The Ontario government will be introducing new liquor legislation on Thursday to protect patrons of bars and clubs. The new reforms target bars where fights start just outside (the bar can lose their licenses), and removing opportunities for date rapes (drinkers can bring their alcohol into bathrooms).
A gymnast from Toronto is currently ranked third overall on beam and is also in the running for the all-around competition after the first round of the world gymnastics championships. Canada has only seen a woman in the final of the world championships three times before.
Ontario has given Toronto $2 million to buy public surveillance cameras to deter crime. The cameras will initially be setup in Scarborough and North Etobicoke, and come complete with remote access and night vision.
In the gun violence section, a man was shot in the foot last night near Broadview and Queen, and another man was shot in the back inside the DNA lounge while police were working as extra security outside. Both have non life-threatening injuries.
Finally, with the city election approaching, the Sun weighs in on what they think the perfect mayor should be like. CityTV have limited their television debate to three selected candidates. The Globe investigates on who Miller is officially backing in each ward, and Toronto Community Foundation chairman Martin Connell gives the city some pointers on why Toronto is losing jobs to the surrounding area.
Thanks to majorleague for the picture of city hall in the rain.