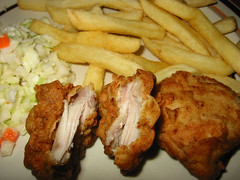 KFC will be slightly more healthy when they switch to canola oil by early next year. 90 per cent of their menu will be free of trans fats, with the remaining 10 per cent to follow shortly.
Wal-Mart may soon be offering banking services in Canada. Contrast this with 5 years ago, when TD was celebrating the fact that it was operating out of Wal-Mart stores.
Toronto’s Expo 2015 bid must be submitted by Friday, and there’s a lot of (digital) ink devoted to the topic. While the various levels of government are still negotiating, city councillor Brian Ashton wants to finish off this whole Expo business, one way or the other. Meanwhile, Milan has now entered the competition. The Star features a large amount of various editorials, public opinions, and wishful thinking on the story.
Toronto band Dollarama has received a legal letter from the discount store of the same name, asking them to stop using the name.
The Star conducted a survey finding broad support for finding new ways to deal with our trash. Nearly 4 out of 5 respondents in the GTA said that the city should consider “significant changes and new solutions to the garbage crisis.”
And, in the scandalous gossip department, a Supreme Court judge may have gone on a nude cruise.
Thanks to thefoodpornographer for the KFC picture