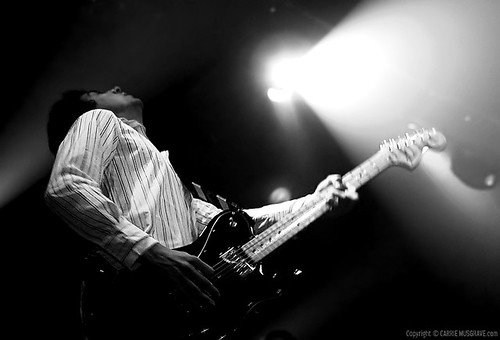 After a cancelled show earlier in the year due to Gary Lightbody’s ailing vocals, Snow Patrol finally made it to Toronto to entertain the packed-in crowd at the Kool Haus last evening, in support of their new album ‘Eyes Open’.
Admittedly, I’m a big fan of their music and had been looking forward to this show for a few months. The thing about seeing one of your favourite bands live for the first time is that you never know how their music will translate or if they’ll live up to your expectations. Some bands who excel in the studio really tend to be crap live. However, right from the opening note, I was relieved that not only did the band meet my expectations, but they exceeded them. Lightbody has one of the most sublime voices in the biz, and if he was still suffering from vocal cord problems, it went completely undetected. Perhaps the hot toddy and lemon he was nursing on stage helped.
Although Snow Patrol are known for their melancholic ballads, they brought a surprising amount of energy to each song, with Lightbody bouncing all over the stage much of the time. A good mix of old and new songs were performed, including the TV-drama-friendly ‘Chasing Cars’, ‘Chocolate’, and every couple in the building’s “song”, ‘Run’. Personally, I was chuffed to hear ‘Somewhere A Clock Is Ticking’, as I wasn’t expecting it at all. Okay, that’s a lie, I got a peak at the set list before they came on stage, so I did know it was coming, but not before arriving at the venue! I adore this song — it punches me in the gut every time, and showcases that these guys have harmonizing down to a science.
From the quirky, and slightly awkward banter between songs, to the high energy music, Snow Patrol delivered the perfect “feel good” concert last night. I’m already looking forward to the next time they come to town.
Photo: Carrie Musgrave