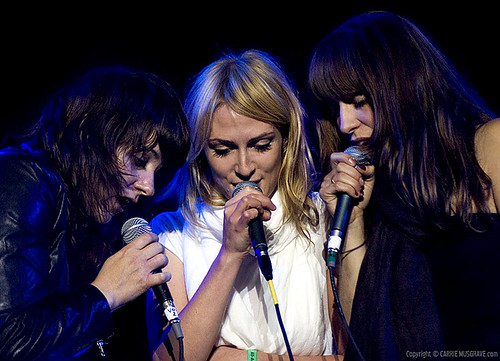 V-Fest has come and gone, and although it definitely had some issues, it was a great experience overall. The Flaming Lips clearly stole the show, even though they were forced to shut everything down after four songs on Day One, due to an 11pm curfew. Their show is like going to Disney Land, but for adults. Multiplied by 10. It warmed the cochels of my heart.
Other notable performances included The Raconteurs, Wolfmother, Phoenix and Muse, who all know how to rock a huge festival stage. Hopefully the Virgin folks take note of this for next year and get rid of the dead weight (I’m looking at you, Meanredspiders) and add more big name talent to draw out more fans.
It’s really unfortunate that Massive Attack had to cancel due to visa issues, because seeing Broken Social Scene replace them to close out the festival really wasn’t the finale that most fans were looking for. Many people left right after The Raconteurs, which was not surprising, since BSS had already played a few big shows this summer. Aside from knowing Emily Haines and Leslie Feist were performing, I probably would’ve left, too. Instead, I stuck it out and was able to go back into the pit to get the shot above.
Did you go to V-Fest? How was the experience for you? Richard Branson (my new best friend — who held my hand…ooooh) said the festival is here to stay, so who would you like to see perform next year? Given the other festivals Toronto has throughout each summer, how important do you feel Canadian content is? Leave a comment and have your say!
Photo: Carrie Musgrave