PhotoTO: Be Your Own Pet
Torontoist has been acquired by Daily Hive Toronto - Your City. Now. Click here to learn more. 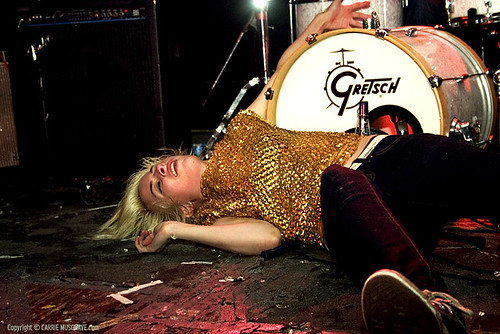 The Black Lips and Be Your Own Pet played The Horseshoe last night, and it was one of the most physical and fluid-exchanging shows in quite awhile — both on and off stage. In no particular order, and without distinguishing which band did what, here are some of the goodies: boy-on-boy action, spitting and swallowing (uh, spit, that is), beer spewing, glass smashing, a certain guitarist jumping into the crowd to make out with some random girl, gagging to the point of almost puking, full-on puking, and glass eating. The only thing that didn’t happen was a pubic hair fire show. We were robbed, damnit!
The crowd was very rowdy and it was difficult to stay upright in front of the stage, particularly while trying to protect a camera and getting all of the action at the same time. No complaints, though, as there was fair warning about what could happen. Regurgitated sushi, I would learn, does not smell pretty.
Oh, the music? It was loud and catchy, but that’s about as memorable as it got. With all the sensory overload, it was hard to pay close attention to everything. Should you go see these bands? If you’re spry and can deal with man-handling, then yes. If there is a penis on fire, hell yes!
Photo: Carrie Musgrave