Phoenix: For those who know? Fo Sho!
Torontoist has been acquired by Daily Hive Toronto - Your City. Now. Click here to learn more. 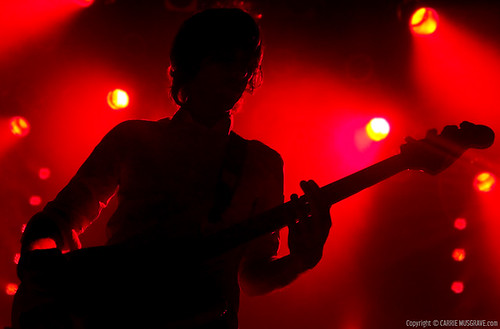 This Torontoist was pouting last week when she couldn’t find out how to get tickets to the Phoenix show Friday night at Mod Club. After futile searches and thankless queries to Ticketmaster all hope was gone. But at the eleventh hour everything changed: an email-invite from Arts & Crafts suddenly arose from the ashes.
The publicized Phoenix gig was actually a special for-those-who-know showcase event—the tickets were so hard to find, you see, because they never existed in the first place! We should be tiffed for all the confusion, but instead, after careful consideration we’re putting a vote in for more exclusive shows in Toronto.
Now, hold onto your democratization-of-music-horses for just a second, and let us explain why we’re so keen on the VIP.

First of all, the clever e-flyer and open email RSVP addy implied that a larger distribution of invitees could happen. In the end, this proved true: Mod Club was packed, and not just with your usual media-scenesters. Audience members confessed to forwarding (extending?) the invitation to both Phoenix-loving and concert-junkie friends.
Second of all, the show was short and sweet. Despite being an hour behind schedule, the band still played early enough to allow for additional Friday night plans. It was an event with purpose: see Parisian pop-rockers Phoenix perform. No opening acts or DJs or surprise guests, just Phoenix. It’s a simple concept that makes our ADD very happy.
And finally, insert concert cliché here: the vibe was awesome. Everyone was dancing or shaking, the crowd was perfectly dispersed around the room, and no one was squished or forced to stand tip-toe to see the show. Torontoist isn’t sure if this has direct correlation to the invite-only status (possible thesis: people in a VIP mindset act more civil) but the cutesy electronic-rock performance certainly had something to do with it.
Photo credit: Carrie Musgrave