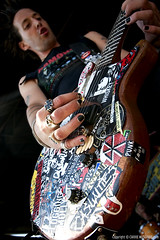 It could be the abundance of shows announced over the past few weeks or possibly the kickoff of the fall concert season in September that’s lending to the sparse choice of live music this week, because there are some slim pickins to be had. Unless you love the Marleys, in which case you hit the motherload!
If anyone has word on some super secret underground shows happening between now and next Sunday, feel free to share the wealth. Everyone loves a gossip.
Recently Announced
Sept. 29 – Tokyo Police Club with DD/MM/YYYY @ Sneaky Dee’s, $10
Oct. 1 – Jet @ Guvernment (price not yet released)
Oct. 6 – Justin Rutledge CD Release @ Horseshoe, $12
Nov. 16 – Bloc Party and Panic! At The Disco @ Ricoh Coliseum (price not yet released)
This Week
Tues. Aug. 29
Mariah Carey @ ACC, $18 – 109.50 (See, told you we were desperate for content. This show is not sanctioned by Torontoist. You are only filler, Mariah!)
Wed. Aug. 30
Know of anything going on tonight?

Sun. Sept. 3
What’s on tonight? Or should we all just stay home in bed together (spooning, of course)?
** Torontoist will be there and may have photos and/or a review in the days following the show(s).