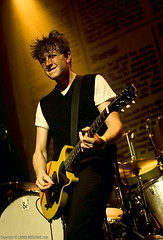 Anyone who accuses indie rock darlings The Futureheads of somehow becoming boring after the release of their second album, News & Tributes, need only see them live. At a sweat-filled Phoenix on Wednesday night, the boys from Sunderland, England pulled off a terrific show and proved that ‘energetic’ is still the best word to describe them.
As if scoring the set list that night wasn’t a great enough feeling, Torontoist got to catch up with lead singer and guitarist Barry Hyde for an interview the day after, and talk about the band’s recording process, the fans, “Hounds of Love,” and lots more. Our show review and the chat are after the fold.

Torontonians don’t handle humidity well. We’re used to long winters and quick, merciful summers. That’s why it was so impressive that, on what felt like the muggiest day of the year, inside an unbearably hot venue (Phoenix was never a more appropriate name), The Futureheads somehow managed to extract enormous amounts of audience participation from a capacity crowd. Splitting the room in two to share backing vocal duties on Kate Bush cover “Hounds of Love?” Easy. Encouraging clapping/singing/dancing/some kind of sweat-inducing movement along to pretty much every song? No problem. After the show, when you could actually see the hot and dirty air that had been filling the room, you knew that The Futureheads must’ve done something right.
The band rolled through their set with ease, playing a diverse collection of tracks from the two albums and innumerable EPs worth of material. They bonded with the audience magnificently (even if deciphering their accents in a crowd of screaming fans was a tiny bit tricky at times), and didn’t disappoint anyone. Even the girl three rows back screaming for “Man Ray” for most of the second half of the show got her wish: right after they made fun of her (Barry flailed his arms and yelped “Man Ray” while the rest of the guys chuckled), they played the track. Whether in their music or with their fans, The Futureheads can pull off cheeky very, very well.
Openers Tapes ‘n Tapes have gotten most of the hype lately and played a good, fun, and relatively quick set to start the night, but despite all of the press it became pretty clear that the audience had come for The Futureheads. When the band packed up after their set, a few fans yelled for an encore. Tapes bassist Erik Appelwick answered them (earnestly and so quietly that few past the first row could hear): “it’s not our show.” By all accounts, this was The Futureheads’ night. When they let the crowd go into the relief of the rain just before midnight, after they squeezed in the encore that Tapes ‘n Tapes didn’t get, there were no frowns anywhere.
We spoke to lead singer and guitarist Barry Hyde the day after the show, over the phone before a Detroit concert:
Torontoist: I caught the show last night, it was great!
Barry Hyde: Oh, it was an incredible show. We really, really enjoyed it [laughs].
Torontoist: What do you guys think of Toronto?
BH: I love it. I’ve been there quite a few times now, I think I’ve played there four or five times…it’s a great city, you know, lots of food, lots of beautiful women. We’ve always had a good time in Toronto. Last night was the biggest gig we’ve done on our own; we played Lee’s Palace quite a few times [before], and the crowds got bigger. It was a really good night all-around.
Torontoist: Why did you choose to cover “Hounds of Love,” anyway?
BH: We started doing it years and years ago, well before we had a record deal. Covers are a good way for a young band to learn how to play with each other, out of the pressure of trying to create a new piece of music. So we used to do “Picture of Dorian Gray” by The Television Personalities, a version of the Neil Young song “Piece of Crap,” and [Kate Bush’s] “Hounds of Love.” I like the idea of covering a Kate Bush song, because she’s quite an odd character and you wouldn’t expect it.
Torontoist: And it ended up doing really well…were you surprised by the success of it, or did you anticipate that when you were recording?
BH: Well we’d played it for years before we actually recorded anything, and we knew that it was gonna be a single….We knew that it was gonna do well, because it’s simple, a lot more simple than a lot of our songs. I think we just kind of captured something when we recorded it and did a good version of it. And yeah, it did really well, it gets played a lot, but so does “Decent Days and Nights,” “Skip To The End,” “Meantime,” you know all those [songs]. Commercially, radio-play wise, “Hounds” did the best.
Torontoist: Well, it’s doesn’t seem to overshadow your other songs. It did really well, but at the same time, as you said, you’ve had a lot of hit singles by themselves.
BH: There are people who only know us from that piece of music and that’s fair enough, but the way I see it, if you’re into this band you like more than that, and if you only like that song then you don’t really like us. There’s a lot more to us than that song, is what I’m saying: a fan of that song is a fan of that song, not a fan of The Futureheads. That happens quite a lot: a lot of people who don’t really like music just like one song of a band, but they’re not fans of the band, they’re just fans of that three minutes of music.
Torontoist: At the show last night it was great, because everyone pretty much knew every single song and the entire audience was singing along to everything… 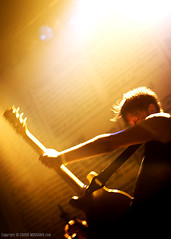