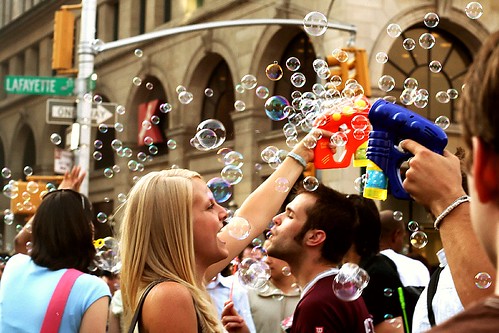 Newmindspace specializes in throwing irreverent, collective urban events. What qualifies as irreverent in a city as quirky as Toronto? How about a giant easter egg hunt, giant game of urban capture the flag, giant subway (and streetcar) parties, and giant pillow fights? No matter what they’re doing, the focus is on getting people – lots of people – together to do something cool, unusual, and fun.
Their next project, accordingly, is all about bubbles. At 3 P.M. on Sunday, at Old City Hall (Queen & Bay), the group is proudly hosting a downtown bubble battle. While the group was founded by two Torontonians, Toronto is a mere one of seven cities participating (the others are Montréal, Vancouver, Edmonton, Pittsburgh, and Philadelphia, while New York City already had theirs two weeks ago). Newmindspace promises that “beautiful bubbles [will] glimmer and shimmer as the wind carries them in an enchanting, cross-country dance.” Sweet.
The event is strictly BYOB (bring your own bubbles), so the kind folks have suggested a few good locations to grab your bubble gear right around the corner from the sure-to-be epic battle. You can find an excerpt from their e-mail to members after the jump. Have fun!
Photo of NYC bubble-blowers from Linus Gelber.

1. Toys R Us in the Dufferin Mall >> has absolutely the best toys: Linkz guns (no dipping required), Turbo bubble generators, giant bubble wands, tumblers and lots of solution. Subway to Dufferin, southbound bus two stops.
2. Zellers at 1245 Dupont >> has the largest bottles of bubble solution and a few good toys. Subway to Dufferin, northbound bus a few stops, walk west.
3. Toys Toys Toys >> on the lower level of the Eaton Centre (Queen St. side) has bubble guns that shoot tiny bubbles, smoke bubbles and bubble guns that you need to dip in a cup. This is a good last minute option.