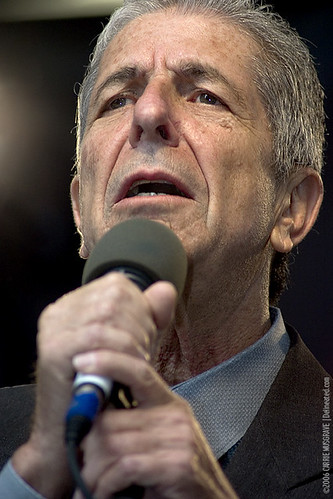 The street was closed yesterday on Bay, just south of Bloor, to let the thousands of Leonard Cohen fans enjoy the outdoor performance at Indigo Books. And what a treat! Leonard was supposed to only introduce his partner, Anjani, who released a CD of music written by Cohen, and possibly sing a song or two, but the crowd got about 4 songs in total, including an unplanned jam session with Ron Sexsmith and the Barenaked Ladies.
I have posted more photos here, on my Flickr account.
More Photos by TOist Contributor David Topping after the jump. He also has more photos on his Flickr account.

People lining up outside Indigo at about 2:00 PM.

A fan watching the crowd from the Bay-Charles apartments.

Leonard Cohen, in the middle of a sea of cameras and warm bodies.